“The setting was a beautiful college campus. A crowd of young students was seated on the grass. The speaker who described this circumstance said they were watching a handsome tree squirrel with a large, bushy tail playing around the base of a beautiful hardwood tree. Sometimes it was on the ground, sometimes up and down and around the trunk. But why would that familiar sight attract a crowd of students? Stretched out prone on the grass nearby was an Irish setter. He was the object of the students’ interest, and the squirrel was the object of his. Each time the squirrel was momentarily out of sight circling the tree, the setter would quietly creep forward a few inches and then resume his apparently indifferent posture. This was what held the students’ interest. Silent and immobile, their eyes were riveted on the event whose outcome was increasingly obvious.” – Dallin H. Oaks
*Made with a mechanical pencil, pink pearl eraser, kneaded eraser, magic rub eraser, watercolor pencil, inktense pencil, India ink pen, colored Indian ink pen, water, and blue painters tape.
*Time: about 8 hours and 59 minutes over the course of 10 days

I made this just to see how much better I’ve gotten better a drawing dogs with my imagination in the last 7 years by basing this off of Yellow dog.

Based off the picture Aint the two lovers cute by vennis82. Two Dalmatians have a good time.

I decided to make a drawing based off of pits with cropped jumping into water with floppy ears instead, to see how it would turn out.

this is a German Shepherd sitting on a tree stump gazing off into the distance.

I finally got around to try out one of my natural sea sponges in a drawing. I also wanted to try out a technique I’ve seen in pictures where a B&W photo has a spot with color in it.

This is an acrylic derpy pit bull on a mixed media background.

this is Riptide and Scout. they 1st appeared in human sight vs dog sight. Riptide lives in a purple house because of a shady real estate agent that takes advantage of the fact that about 90% of the creatures that in K-9 Cove are colorblind. 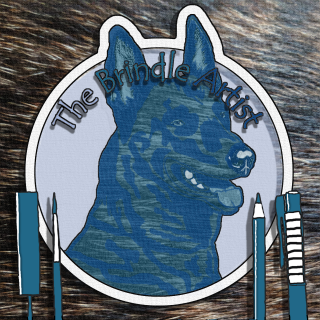